The creativity that creats the future

Seizing the synthesis of authoritative researches, seen in the historical perspective of the third millennium the whole humanity has to confront with three interconnected themes: GLOBALITY - COMPLEXITY - EVOLUTIONARY CREATIVITY. Within these themes deserves special mention the new concept of "time creativity" theorized by the Nobel prize for physics Ilya Prigogine: a scientific theory that drives the new cosmology of universal creativity, stimulating a general reflection on the dimension of time, which represents, after the conquest of all spaces on Earth, a "new frontier" yet to be explored. In short this is the paradigm of propulsion, the common denominator in the creation of the future, with which interacts the Global Complexity Art in realizing its expressions, including this text. This artistic approach is based on the neo-humanistic relation between art and science, which follows the way opened by the great german artist Joseph Beuys with his concept of enlarged art.

The leading historical context is that of industrial and financial globalization, along with the unfolding of the global network of transportation and medias, melting in a set that drives dense interactions between local and global events, while communication implodes towards real-time as in the "global village" predicted by McLuhan. These circumstances are leading to the image of a world becoming smaller every day. This is also the existential and cultural territory of humanity which moves into the configuration of Global Complexity Art, challenged to look at this magnified panorama of globality to create an adequate picture of contemporary reality. Certainly the global dimension is not only a much larger space than a landscape in traditional painting, actually it is rather a complex set of different worlds generally confused and largely incompatible, which requires multidisciplinary approaches and innovative parameters.  As a response to this need, the most suitable methods had been adopted in the concept of Global Vision, regarding local-global interactions, largely disclosed by Alexander King, a scientist of international fame and member of the celebrated "Club of Rome", generally known for the first publication based on the Global Vision. In fact this international "club" of scientists and creative intellectuals made clamour in the early 70s with the famous report "The end of growth", containing alarming evidence about the rapid decreasing of environmental tolerances and non-renewable energy resources, a process scientifically called "entropy", which was possible to verify for the first time only trough a multi-disciplinary investigation on global scale. The logical conclusion of this report was formulated in the request to start a "global shift", principally addressed to all governments around the world, but also to normal people of good will, all put in charge of changing the current patterns of economic and productive development, not less than leading socio-cultural models and individual behaviours, previously thought indisputable but since than declared of having no future. Decades have passed since then, we entered the third millennium, with a growing public awareness frustrated by delays of the required global changes, made even harder trough the accelerated industrialization of previously underdeveloped countries like China, India, Brazil, necessarily enforcing an anachronistic development which the whole world pays with increasing eco-climatic crises and catastrophic environmental tragedies involving any continent of our planet. 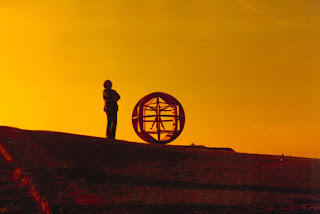 Performance: Shamanic journey trough time
Coming to consider the analytic methodology underlying the Global Vision, since the beginning a primary tool consists in the Systems Theory, an interpretation of "the world as a system of interactive systems" evolving over time. This was also the method applied by the System Dynamics Group from the famous MIT in Boston (USA), who actually elaborated the above mentioned report. After the inventor of the Systemic, Ludwig von Bertalanfi, the world's most relevant theoretical and philosopher of the General Systems Theory is represented by the charismatic figure of Ervin László. Already a member of the Club of Rome and  proponent of the notorious Report, László founded in his country, at Budapest, the General Evolution Research Group, which points out the essential link between Systemic and Evolution. As a matter of fact the systemic interpretation of the world requires the right tools to define the evolutionary dynamics which systems manifest in time, therefore the System Theory finds its natural complement in the latest evolutionary concepts going under the name "General Evolution". With the crucial conclusion that, similar to how the Systemic interprets each sector of reality, the General Evolution is based on the discovery of evolutionary laws manifesting similarity in all spheres of reality, from the nature of Earth to the nature of the universe, not less than in social and cultural systems of human history. In this way the System Theory and the General Evolution, together enact the Global Vision in viewing the world over space and time.


Actually there is still an important element to complete the set of parameters sustaining the Global Vision. The missing point is that evolutionary dynamics are neither linear nor deterministic, but rather show a character of "creative complexity" better described by the Science of complexity, in particular by the new theory of time formulated by Ilya Prigogine, who describs evolutionary processes in relation to specifics dynamics of time. First of all he observes that evolutionary processes manifest themselves objectively by an increase of complexity, just as the evolutionary level of systems corresponds to degrees of complexity. For Prigogine the relevant question in this process is that the evolutionary dynamics are not linear but interrupted by bifurcations with two options: decay or evolution. To be more clear, evolutionary dynamics come to dangerous points of saturation which offer two opposite ways to be overcome, each with a different type of complexity: entropy and syntropy. The entropy indicates the decline of a systems, evident by a state of chaotic complexity inherent to a stadium of confusion between its components, as characteristic of systems in phase of decay, degrading toward collapse or death of the conformation; while syntropy corresponds to the potential capacity of systems to reverse the decline  in renewal, the confusion in a new order of more complexity. The key point is that chaotic instability is suitable for evolutionary creativity, making it possible to reorganize the contrasting components in a new coordination by creating a system of higher complexity, a conformation in which the classical term "union of differences" finds an actual meaning. According to the new theory of time formulated by Prigogine, the degenerative phase of systems, the entropy, corresponds to the traditional concept of "devouring time", while in the creative phase of systems, the "syntropy", shows a complementary function of time before unknown, the "creative time" pointed out by Prigogine. This new way of considering time goes to change the traditional continuum space–time defined by Einstein, opening to the “post-einsteinian” cosmology with important changes for the future. As the relations between dynamics of time and dynamics of evolutions touches far reaching arguments, opening also to new interpretations of ancient concepts of time.


The mentioned approaches are the main operational coordinates implied in the Global Vision adopted by the Global Complexity Art. The image of reality they offer is profoundly altered compared to the traditional view of the universe, the earth and man himself. They reveal that growing complexity of chaotic degradation on one side, and development in organizational complexity on the other, are both dynamics interacting in evolutionary creation. They show that everything is transformed under the impact of universal evolutionism and that, trough its indetermination, the universe of all evolutionary processes has essentially a creative character, an aspect described by Bergson long ago with his concept of “creative universe”. One can say that this universal dynamism recalls the statement of Heraclitus "everything flows", now to be completed with “flows towards decay or evolution”.  In conclusion this dynamic vision of universal creativity requires, first of all, to recognize a certain continuity between the creativity of universal nature and the cultural creativity of humanity; in other words, how through human creativity the universal creativity drives, with analogues laws, the cultural evolution of mankind. In particular we must recognize that the socio-cultural evolution on Earth, specifically during the time of globalization, has all the characteristics of a fast-approaching bifurcation: the options are either an entropic catastrophe of incalculable proportions, or the coordination of human creativity leading a global emancipation towards a planetary system of higher complexity. The same logic guided also the conclusion of A. King in his book “Questions of survival” describing the dawn of a “planetary society”, written 20 years after the notorious rapport, edited with his participation, by the Club of Rome.
In the dramatic terms of contemporary evolution of the world, we have the key point giving actuality to all evolutionary projects dealing with a global organisation of mankind, which undoubtedly forms the next historical step of human evolution. Actually there are important indications, on high financial and political level, calling for a “new world order”, while others, like Ervin László and the Club of Budapest, try to spread the idea of a "global shift" towards a new culture based on planetary consciousness. Considering the leading trend of contemporary history, there are also good reasons for concern, since the evolution towards a global system admits potentially different models of a more or less democratic inclination, which can be condensed in two types. One is the evolution of world's power structures coordinating into the high complexity superpower of a Global Empire, fulfilling the "dream of all empires" of the past. The hypothesis of this new pyramidal hierarchy of a centralizes global power system, not legally formalized nor geographically localizable, which delimitates largely national sovereignty and real democracy, has been well described in “Empire” by Antonio Negri, a well known Italian professor of political science. The other option consists in the possibility of an anthropological evolution of humanity interacting with a creative evolution of global democracy, which finds its highest level trough a generalized culture of complexity; in a trend comparable to "The first global revolution and the future of humanity", as entitles a book written by A. King and B. Schneider, describing the evolutionary process towards the “first planetary society”.  This kind of world project, which represents the higher complexity level of a socio-cultural democracy on global scale, vaguely defined as "union of diversity", has one of its most authoritative prophets in the french sociologist Edgar Morin, who discusses all connected scientific and anthropologic questions in his books like “Fatherland-Earth”. In “The way. For the future of humanity” Morin underlines the necessity for a political development towards global cooperation “in the prospective of a new humanism”, on global scale of course. In this context should be referred that for neo-humanistic thought, as for Beuys, any historical prospective leads towards a Global Humanism; so for the Global Complexity Art. Farther on, speaking about humanism obliges referring to European cultural history, from ancient Greek with the invention of democracy and first freethinking philosophers, to Renaissance humanism, which, with the Age of Enlightenment and the French Revolution, created the bases of  Modern World: the point is that now the new European Union composed of states with different cultures an languages, once enemies now cooperating, on a longer view, with his unique cultural background, has the best premises to develop as first model of a higher complexity system of society called “unity of differences”. However, in conclusion has to be mentioned also a third way, since in a realistic view of the future exist probabilities for a variable combination of the two hypothesized models of world systems, where the first option predominates in the short range of time, while the second option develops to its maturity on the longer term. Ultimately there remains only to say that in a creative connection to this kind of historic crossroads the Global Complexity Art has its larger reason of being.

This website was built with Webnode
You can also have an impressive website for free!
Try it out